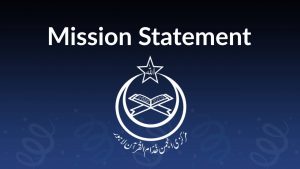 The sole aim before The Markazi Anjuman Markazi Anjuman Khuddam ul Quran Lahore.
Is to disseminate and propagate the knowledge and wisdom of the Holy Qur’an (The Foundation-Head of Faith and Enlightenment) on a vast scale and at the highest intellectual level. So as to achieve the revitalization of Faith. Among the Muslims in general and their Intelligence in particular with the ultimate objective of bringing about an Islamic renaissance and ushering in, for the second time in history, the blessed era in which the True Islamic Way of Life Reigned Supreme.