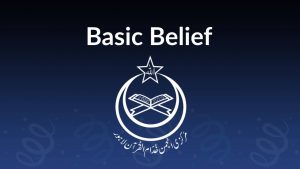 The basic beliefs of Khuddam-ul-Quran are the same as that of Ahl-e-Sunnat Wal Jama’at, according to which it is obligatory upon every sane adult Muslim that He believes in one, unique, incomparable God, Who has no son nor partner, and that none has the right to be worshipped but Him alone. He has the most magnificent names and sublime perfect attributes. No one shares His divinity, nor His attributes. No one has the right to be invoked, supplicated, prayed to, or shown any act of worship, but God alone. God alone is the Almighty, the Creator, the Sovereign, and the Sustainer of everything in the whole universe. He manages all affairs. He requires none of His creatures, and all His creatures depend on Him for all that they need. He is the All-Hearing, the All-Seeing, and the All-Knowing.He believes in the existence of the angels and that they are honored, creatures.He believes that God revealed books to His messengers as proof for mankind and as guidance for them. Among these books is the Quran, which God revealed to the Prophet Muhammad. God has guaranteed the Quran’s protection from any corruption or distortion.

He believes in the prophets and messengers of God, starting with Adam, including Noah, Abraham, Ishmael, Isaac, Jacob, Moses, and Jesus (peace be upon them). But God’s final message to man, a reconfirmation of the eternal message, was revealed to the Prophet Muhammad.

He believes that Muhammad is the last prophet sent by God.

He believes in the Day of Judgment (the Day of Resurrection) when all people will be resurrected for God’s judgment according to their beliefs and deeds.

He believes in Al-Qadar, which is Divine Predestination